For the love of God, God… 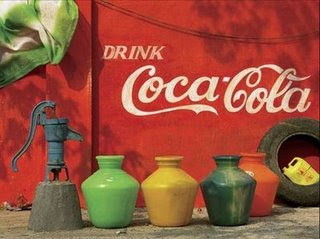 …we need some H2O here. Like really, it’s not even funny anymore. Ever since I have moved to Indore, I haven’t showered. I mean, we have that balti and mug and all, but flowing water with bubbles and pressure remains a distant dream. So does using conditioners. And bleep bleep, after bleep after bleep, has happened to my swimming pool plan. Due to acute shortage of Water, our club people, which FYI is supposed to be the nicest club of the city has closed all the showers but two in each Mens and Womens locker rooms and the two so called active showers have had some more than passive turnout with water pressure, so much so, that there is a queue to it. It’s not a fun scene there, I especially loathe the flabby auntyjis chit chatter of Bridge while they shrug their shoulders and flip their receding hair in black skirty swimsuits in the shower queues.Thanks, but no thanks. I utilize less clothes, I utilize less utensils and get frustrated all day thinking of how much water we used to have in New Bombay! Oh also, there is no warm water. You’re smart, you know why.

I don’t freakin give a shit anymore if its Taai, Taaya, Mamu, Chote Bhaiya, Chacha Sasur or whoever jagat bhaiya wants to run my city. But I want the damn water for my hair oil days.
Posted by Unknown at 12:25 PM

there was a time when in dilli the water shortage affliction resulted in people remembering random relatives/acquaintances from their past who happened to live in areas blessed with greater water supply department mercy. so ppl arrived sometimes announced and sometimes unannounced to actually have showers at their places. ofcourse it also produced lots of "aaoji.. tuhada hi ghar hai ji" and other catching up like "pappu inna vadda ho gaya hai" etc etc!

also won't forget ppl hustling at the mohalla's park since it possessed the sole water pipe with real water in it. ppl with towels, shaving creams and toothbrushes in one hand, bucket in the other making there way, determined to charm their way to the front of the queue.

some days, those were, some days!

Is it a deficit in the snow pack or rains failed? What is the main source in your area of the globe, is it both a snow pack and rain fed watershed?